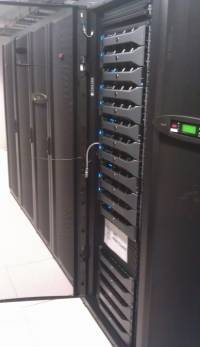 The para cluster is getting quite old, both in terms of hardware and in terms of software. An upgrade or reconfiguration may be coming at some point.

The current cluster consists out of para33 and para35-para37. To log into the new cluster, go to paracluster or para (which will bring you to the head node of the cluster, currently para33, but users should not count on that number to be the same forever).

These nodes are only accessible from the head node using the system-supplied TORQUE queing system. You can however use the environment modules to swich between MPICH and OpenMPI.

Over the past few years the speed of CPU's has not increased according to Moore's law. In fact we are at a hold on about 3 GHz for at least 10 years. To cope with the ever larger requirements for computing power the only option is to increase the quantity of CPU's. This is achieved by the implementation of multiple CPU's on one chip (dual core, quad core, etc) and by the availablility of multi-processor units as centralized resources. In addition, Hyperthreading can be available, which makes it (almost) possible to execute two threads simultaneously on one core.

The STRW computer department anticipated this trend by making available a parallel computer cluster some x years ago. At that time we bought a set of cheap machines to see if the need for a parallel cluster in the Sterrewacht was high enough. This was indeed the case. However, due to the low cost hardware of the current cluster the reliability was low and over time almost half of the machines died.

The cluster has been named with computer names that are pine para#, where # is a number. Each of the nodes has two data disks, available as /net/para#/data1 and /net/para#/data2. Please make sure to use those “network names” for the disks, since the other nodes will not be able to find your data if you refer to it as /data1 or /data2. Nodes para33 - para37 have these two disks, nodes para10 - para13 only have one data disk: /net/para#/data1. Putting your data there during calculations will certainly work faster than having data on a remote disk (like on your desktop pc or on the ijsselmeer disk server). You can copy data from/to every other machine in the STRW by logging in to the para machines. Each of the para machines 'sees' the normal STRW environment similar to your desktop. Actually, accessing your local desktop disks may slow down your job enourmously, and it may even crash the nfs service on your desktop, which is just not configured for the combined access load of more than a few fast cpus. So don't do that!

The cluster used to be free for use. But the time has come (according to your representatives on the computer committee) to implement a queuing system. Our implementation uses the Torque (OpenPBS) queuing system. Most of the para machines are no longer directly accessible. In stead, you log in to paracluster and submit your job to one of the queues from there. More details on the torque pages.

To see the current use of the cluster, have a look at the ganglia WEB page (select PARA as the source; the overview also show other groups and clusters of the institute). Note that this site is only accessible from within our networks.

There is no node available for interactive jobs, but the qsub -I option is now available to submit an interactiev job. This may make you wait until the requested resources become available, and inside the interactive login you get on one of the cluster nodes, you will have to use mpiexec like in a torque job script. So you are not allowed to login to para34 - para37 and start running jobs outside of the queue. Doing so will mess up the resource tracking of the queueing system and may thus hang up a para cluster node, for instance by over-allocation of RAM. If this is detected, your (non-queue) job will be killed mercilessly

The LOFAR group has payed for one standard node and four additional nodes with more local disk, and therefore they have a separate queue lofarq.